As a lifetime student and instructor, Sifu Ryan Scott has seen the same transformation in the lives of his students as he has experienced in his own life. His passion for practice is surpassed only by his love for teaching martial arts. From young children to full-grown adults, his teachings of Kung Fu and Tai Chi have given many individuals the opportunity to become better martial artists, spiritual seekers, and just better people.

Decades of Martial Arts Experience Passed Along to You

Since age 8, Sifu Scott has practiced martial arts in dojos across the US, in China and Japan. He has extensive experience working with some of the world’s highest-ranking martial artists in Brazilian Jiu-Jitsu, Tai Chi, Aikido, Tae Kwon Do and Yuchia Kung Fu. Ancient Chinese martial arts are his primary teaching philosophy because of their richness in spirituality and practical use in everyday life.
Sifu Scott is one of only 9 students (out of thousands) to ever reach the rank of black under Sifu Robert Brown, a martial arts master with 40 years of experience and black belts in 4 different martial arts styles. He has also completed a pilgrimage to China to visit the Shaolin monks and briefly studied Aikido at the Hombu Dojo in Japan. Sifu Scott currently trains with Roger Machado of the famous Brazilian Jiu-Jitsu Machado Family, and often incorporates principles and techniques from Brazilian Jiu-Jitsu into his adult martial arts classes. 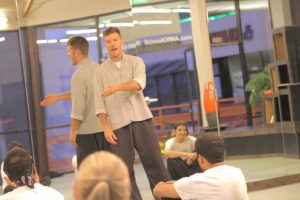