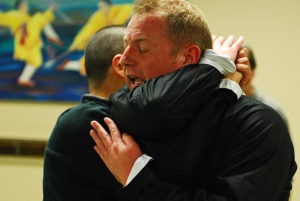 When I was young I used to choke a lot. I mean this both in the physical sense (me choking on something, not choking someone else as we do in the adult martial arts classes) and the mental sense. For instance, I used to be totally incapable of taking pills. I would psyche myself out and gag on them, so my mom had to grind them up and hide them in my food. I also recall a time in middle school when my family and I were eating at our favorite Chinese place. We had a bowl of thinly cut strips of spicy beef that I was really enjoying when I started choking on one particularly lengthy piece. I had not chewed it nearly enough and tried swallowing it but didn’t do a good job. Half was in my mouth while the other half was down my throat. It got pretty dramatic as I hacked and hacked in front of the entire restaurant for about a solid minute until I was finally able to swallow it. In a gesture to ease our unpleasant experience, the waiter brought us another bowl of beef.

These physical incidents of choking were at least partially mental in origin. I hadn’t fully committed to swallowing, so I ended up with something half-way between swallowing and not. I did the same thing even when I wasn’t eating. When I played tennis in high school, I used to choke more often than not on my serve. I would send the first ball into the net, then get so scared of double faulting that I would  either send the 2nd one into the net or lob the ball over. It wasn’t until I began practicing martial arts that I understood how badly I had been waffling over simple decisions and actions.

In our Adult Martial Arts and Brazilian Jiu Jitsu classes, we learn how to choke other people, but we also learn about our own propensity for second-guessing and anticipation. In sparring, we don’t have time to think before striking; the opening will disappear. If we try and perform a technique on the count yet we are up in our head overthinking things, we’ll go too early or too late. Even while actually choking our partner we must fully commit to the technique to get the tap, or else let go and move on to another technique so that we don’t tire out our arms holding on to nothing. The ability to act quickly and decisively is of paramount importance.

In Karate Kid, Miyagi Sensei tells Daniel that he must commit to Karate or quit. “Walk on one side of road, ok. Walk on other side, ok. Walk in middle, squish like grape.”  We too must commit to practice and the important things in life in this bigger sense, otherwise we are always in that middle ground between action and inaction, as if choking on a half-chewed piece of beef.

The best way to get better at acting decisively and avoid choking in martial arts and in life is to practice. Meditation and watching the breath can keep us calm. Mindful action keeps us in the moment. In this moment, there is nothing to keep us from decisive action. We are not overwhelmed by the task at hand because we don’t think of all the ways we might mess up, nor do we think of our past mistakes. We practice in this way as often as possible, then do the same outside the dojo in everyday life.