Web of delusion and non-attachment

Web of delusion and non-attachment 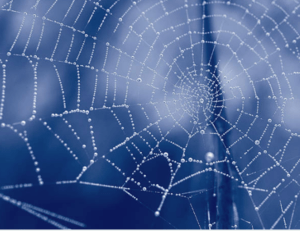 I have a friend who has been unofficially diagnosed with schizophrenia. He doesn’t get psychiatric help or take medication, and his symptoms make it difficult for him to work and have a social life. One of the most difficult aspects for him are the constant delusions he suffers from. For example, my friend believes that a life-like crucifix on display at the Detroit Institute of Art isn’t just a statue, but the actual body of Jesus. He believes that because of this, the city is cursed, and that Detroit’s economic and social challenges are the result of that curse. I love my friend and certainly don’t intend to make light of his situation, but I’d like to use this as a starting point for an important topic: the web of delusion and the importance of non-attachment.

I’m not a psychologist and therefore I can’t really speak with any authority on the mechanics of this disorder; instead I want to speak in general terms. It seems that a main issue for my friend is similar to an issue that most of us have: we make connections between facts and events and create meaning where there isn’t any. This is an endless source of suffering.

My friend does this more than most people, hence his difficulty functioning in society, but I would say that we all do it way too much. Let’s say someone looks at you funny. The last time they looked at you that way you were in an argument, so you rack your brain to think of what you did to offend them this time. This is unfair, you think to yourself, I should be the one who’s angry!  After torturing yourself for hours, they finally tell you that they have a stomachache.

This kind of misunderstanding is uncomfortable, but easy enough to clear up. If this sort of thing only happened every once in a while, we would be totally fine. The problem is that we do it constantly. We spend our days nonsensically connecting things. We make them mean things about ourselves and the world, then base our actions and really our entire lives upon these assumptions. For example nearly every time I get sick, the discomfort is so real that I convince myself that it’s worse than the last time I was sick…in fact, it may be the most sick I’ve ever been. I ultimately come to the conclusion that I’ll probably be sick for the rest of my life. I resign myself  and think I may as well just get used to it. This is ridiculous, yet I’ve been told it’s an experience I share with many people. We weave together a web of unreality and get stuck in it.

The tricky part is we can’t just stop making connections completely because it’s an important part of staying alive. We see someone on TV get hurt when they get hit by a car, so we assume that the same would happen to us and thus avoid walking into traffic. This is a useful connection. What we really need is the ability to separate fact from fiction and draw the right conclusions.

When we spar in martial arts, we work on non-attachment. When someone kicks you, if you keep thinking about that kick and how they might kick you again and how bad you are at sparring, your mind is stuck. Then a punch hits you. The right way to handle getting kicked is to not add any meaning beyond what happened: your partner kicked, you didn’t move, so a foot hit you. Next time try moving. This kind of instant feedback makes what we do very useful for reprograming our consciousness. We don’t have time for attachment.

If we can apply this awareness and non-attachment to other things, we can unstick ourselves from the web of delusion. I have found the following to be a useful practice:

When coming to a conclusion, I simply ask myself if the connections I’m making between facts and events is real, or if it’s something I’ve made up. What is concrete? What would be clear to anybody observing? If 100 people in the same situation looked at the same facts, would they come to the same conclusion? When we attempt to see things from another point of view, it opens us up many possibilities. We can choose possibilities instead of limiting ourselves to the web of our own viewpoint (a very small and fragile place). I may decide that my conclusion is correct even though many other people might disagree. It is important that I have at least examined the facts.

Meditation is an important aid to clear away our baggage of attachments and give us a clean slate. If you find yourself particularly stuck, meditate, practice Tai Chi or do anything that clears your mind. Then, in that clearing of non-attachment, take a new look.

Try this out and see if you can break free of the habit of creating meaning where there is none. Allow yourself to be free from the web you’ve created from irrelevant connections. Be here, in this moment, in truth.

Learn more about our classes.