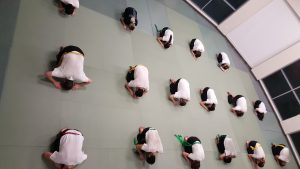 few days ago I got a great question from a student. She asked about the difference between acceptance and surrender. Here are my thoughts.

In general, we fight a lot. Struggle is important because it helps us grow. Moving your body against resistance builds muscle and stamina. Similarly, having difficult conversations helps you improve your relationships. Meditating amidst distraction improves your focus.

Acceptance is the first step in moving beyond. Let’s say you are dealing with knee pain. I use knee pain as an example so often because it can derail our Kung Fu, Tai Chi and even meditation practice. If you refuse to accept your knee pain, you ignore it and keep doing what caused it to hurt in the first place, you may make it worse. Fighting against the pain by continuing to kick, move or sit in the same way is just silly.

By accepting the fact that your knee hurts, you connect with reality. From there you can understand what causes your knee to hurt, then take steps to heal it. This is distinct from what most people do which is spend too much time worrying about their knee and fantasizing about how terrible it will get. If you’re like me, every time you get sick for more than a few days you start having thoughts about spending the rest of your life laid up in bed at the hospital. This is obviously not helpful either. Acceptance is about being connected to the reality of this moment. This moment is the best and only place to move forward from.

Surrender is more than acceptance; it is deeper, more encompassing, yet simpler. Think of being tossed about on the waves of the ocean during a storm. You fight against the waves, thrashing your limbs about to no avail. You cannot fight against the entire ocean. (I know a few people who will read this and say Oh yeah? Watch me!)

Surrender is something different. If acceptance is floating on the surface, think of surrender as diving or sinking beneath the waves. Under the surface, the water is calm. This is really impossible for the ego to do. The ego, seeing itself as separate from the water, is too afraid of drowning. So surrender is essentially a function of transcending the ego and identifying with something bigger, experiencing oneness.

Surrender is necessary to get beyond a certain point in meditation, in Tai Chi, in Kung Fu, and in life. In class, you practice surrendering to the process of improvement. You let go of needing to get it now, or comparing yourself to others. Being a great partner requires you to surrender in the moment to whatever the other person needs, to melt with them.

If you understand acceptance as a function of the ego, then it is likely the first step towards surrender. You accept that you are identifying as something small, you recognize that that is the function of the ego, and you do this with your logical mind. Surrender comes by letting this fall away from you or diving deep beyond. It isn’t a logical process; it may be the absence of logic and thought. Surrender is a feeling, or being. It may be said that you accept, but surrender happens to you or through you.